Tripura Police works to maintain the law and order in the state, protecting the rights of the people and ensuring a secure society for them to live in. The Tripura Police is often applauded across the nation for its modest approach towards a common man. It is regarded to be one of the most disciplined state police forces in India. Tripura Police has contributed a lot towards fighting insurgency in the state of Tripura.

With the recent notification from Tripura Police, it invites competent applications from male and female candidates join the force as a Constables. A total of 1000 vacancies are to be filled-up through this recruitment on merit basis selection. The selection will be done through recruitment camps organized for various districts of Tripura from 10-November-2022.

The details of the vacancies are underlined: DIRECT RECRUITMENT 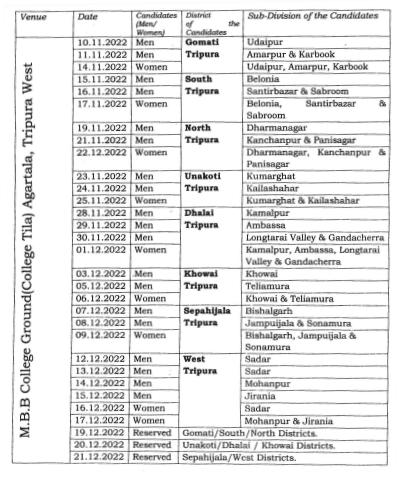 The Selection will be held in three successive stages namely:

(i)           Physical Efficiency Test / Physical Endurance Test (Only for scrutiny)

The final selection will be done on a Merit Ranking basis from the marks obtained in the Written and Personality Test on the same venue as per the discretion of Tripura Police.

How to Write A Cover Letter Tips For Fresher CV Resume Job 2022-23 Application?

Why A Professional Degree is Not Enough? Certifications, Soft Skills Are Important

Why IT Skills are Important to Every Job Seeker?

Explore your career opportunity: Is this Sarkari Job, Tripura Police Constable Direct Recruitment 2022-23: 1000 Regular Constable Vacancies 2022-23 is not relevant to your Qualification, Experience, Sector, Company, Location you want to work with; You can FIND ALL Latest Sarkari Jobs 2022-23 Advertisement from Public Sector Units or Departments.

All candidates whether in Government Service or in Government owned undertaking or other similar organizations/ Corporations/ Boards/ Bodies or in private employments should forward his/ her application through his/ her Controlling Officer/ Employer for applying to Tripura Police Constable Direct Recruitment 2022-23: 1000 Regular Constable Vacancies 2022-23.

For any questions or comments you might have, contact via email at employmentdoor@gmail.com Our Employment News or Free Job Alert will help in getting all those vital information that can help you to select your best career option with just an email subscription. Subscribe to our Daily Employment News or Free Job Alert right now to get daily job updates in your mail box.
Previous JIPMER Nursing Officer Direct Recruitment 2022-23 Application Form: 433 Vacancies
Next OSSC Combined Technical Services Exam 2022 Application Form

Employment News of This Week